Today I am going to take a look at an updated version of a new file browsing tool which has appeared on AmigaOS 4.1 over the past few months, Workbench Explorer.

File browsers serve an extremely useful purpose, they can be used to locate files which you may have misplaced within your Amiga and for those who are no exactly adept with Amiga DOS commands, some file browsers take out the hassle of having to remember the entry copy Work:  to DH0:  which of course will copy the entire contents of your Work partition to your  AmigaOS 4.1 partition.

File browsers come also in different styles such as the more primitive Filer, to Diskmaster 2, to the most well-known program Directory Opus which has long been considered the King of file browsers on the Amiga.  AmigaOS 4.1 actually comes with a copy of Directory Opus 4 which I have to say is great for un-zipping multiple files I have downloaded from elsewhere and then having these unpack all the same folder, it certainly does save you time.  Version 5.91 also exists via a link from https://sourceforge.net/projects/dopus5allamigas/ and users of Amikit will find a similar version sits on their Workbench, however truth be told, I am not exactly a fan of this particular update as on AmigaOS 4 especially, I find it took primitive looking, even more so than its previous version.

Enter Workbench Explorer which comes to us from Amiga X5000 user Mark Ritter and is available to download here from OS4 depot. This version is numbered 1.6 and as per the previous updated version, this is very much a work in progress.  The file is a nice and small 2MB in size and when you unpack and install the program file, you will see the installer utility.  It is recommended that you install this on the same partition as AmigaOS 4, so DH0: however you do have the option to change this. 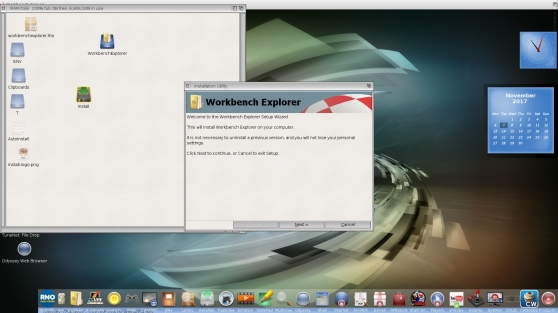 The installation will take all of about 15-20 seconds to complete.

Once complete it is just a case of opening up the program folder where you are greeted with the program file and also some instructions. 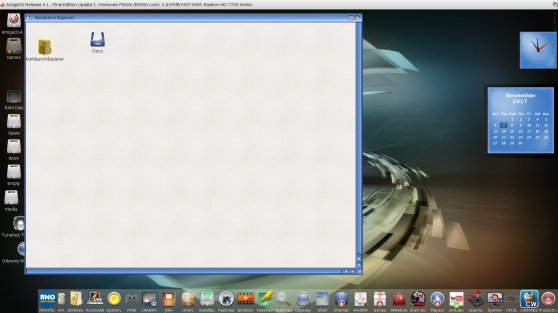 The documentation comes in the Amiga Guide format

Mark himself admits, he is not too big a fan of writing up manuals, however it is worth having a quick read of this as there are a number of useful keyboard shortcuts that you are going to want to use.

In terms of starting Workbench Explorer, you have the option to place the program in your WBStartup so this starts automatically when AmigaOS 4.1 is switched on, you also have the option to add the program as a commodity so that the keyboard shortcut of CTRL+Left Amiga+E will open this up, or you can have this sitting on the Amidock like I have below and you will see it is the third from the left on the bottom row of icons.  The icon resembles an open folder with the letters WE for Workbench Explorer on it.

Opening up Workbench Explorer for the first time we are greeted with the following screen which can be adjusted to full screen by pressing F11. 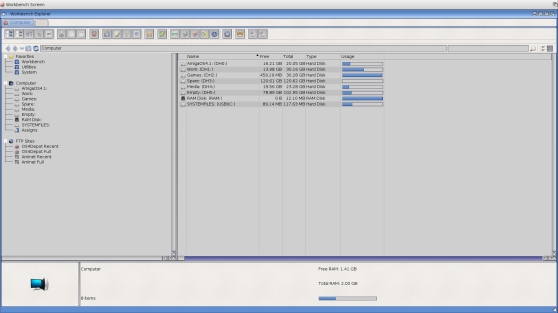 Workbench Explorer makes use of the Reaction GUI (Graphical User Interface) which I am a fan of as it has a nice clean look about it.  Your various disk partitions are displayed in a tree like format on the left hand side of the screen and clicking on one of these partitions will then display the contents of that folder in subdivided screen on the right hand side. 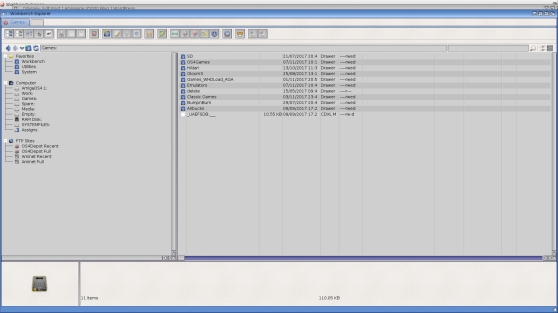 The drawers can be viewed in a different format by right clicking the mouse button and amending the view style to thumbnails as per the example below.

Or you have the option to view via icons.

If I go into my OS4 games folder for example and look for Wings Battlefield some nice icons are displayed.

Sadly one limitation that I have found thus far and certainly where WHDLoad games are concerned, is that if I go into a drawer which contains a WHDLoad game, I am unable to see either the executable game file or its associated icon. So as it stands in this current version of Workbench Explorer, WHDLoad files are not yet supported and perhaps we may see this added in a future updated release?

It turns out that WHDLoad programs can be run from within Workbench Explorer however you will need to  click on the slave file to run the game which I guess is what threw me at first.  The lovely icons that you will normally see are missing, so it would be lovely to be able to see this within a future update of Workbench Explorer.

It is possible to run certain programs and files from within Workbench Explorer. For example in my Media drawer, i can select an MP4 video and have this play in its default video player which in my case is Emotion. 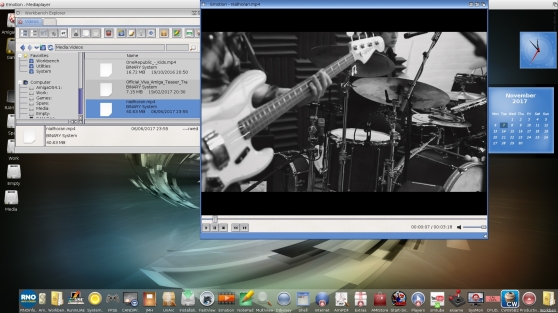 However similar to WHDLoad files what is missing at this stage in this programs ongoing development are some nice icons to show that the file you are selecting is an MP4 so I think this too would be a nice feature to have further down the line in a future update.

It is worth remembering that Workbench Explorer is a constant work in progress and that compared to other file browsers like Directory Opus or DiskMaster 2,  this is actually a lot more advanced in features than other with the added bonus of it being a lot more user-friendly. So far there are have been 6 versions of this program released within the past 12 months and each version has sought to add yet more and more new features.  The option which will allow you to download an MP3 file’s album cover art which is a feature of this latest release.

You are able to download an album’s cover art by pressing the right mouse button and going into Tools and selecting this from the menu. 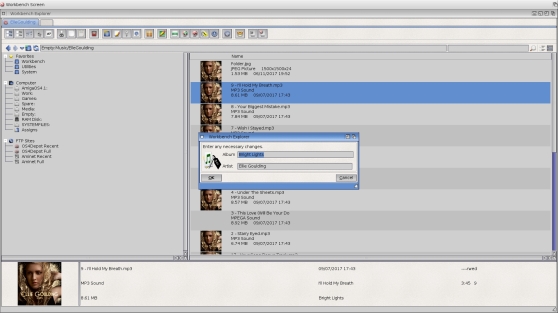 From here if there are multiple versions of the same album released around the world, then you can select this from the list.

There is a bug however when I tried to apply this to my collection of Take That MP3’s, now I am guessing that this is down to how the file structure is laid out which will apply the image to all the items in the folder. 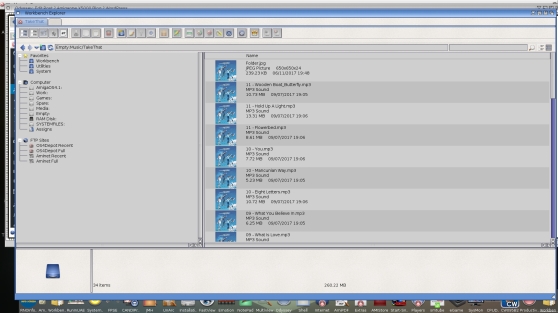 As you can see from the above screenshot, I have multiple Take That albums all grouped together in the same folder with several songs named as song number 11 on their respective albums, but it has applied the album art across all of the songs. I guess the only way to remedy this and have the correct album art is to create separate folders for each individual album, so if your music collection is in folders  like mine where I have them via artist as opposed to separate albums, this feature in its current guise may not be totally useful or feature complete.  However if your albums are grouped in separate folders, this unique feature of being able to download the album art within the file browser is really welcome and certainly sets this program apart from something like Directory Opus on the Amiga. 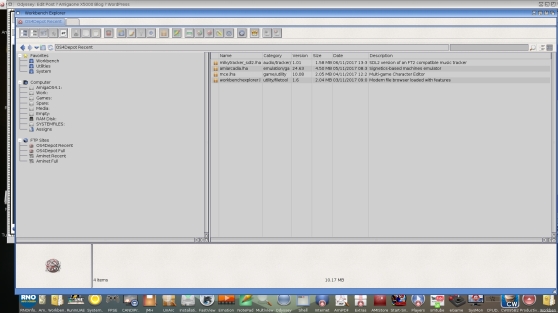 Another really cool feature that I like in this program is the ability to set up your favourite FTP or program download sites from within Workbench Explorer and then have it display the contents ready to download  on the right hand side of the screen.  As you can see in the example above, I am able to look at the latest files from OS4 Depot which means that I no longer need to open up Odyssey or Netsurf to do this.

As you can see from the screenshot above, this will download from within Workbench Explorer and will download the file to the Ram disk.

Within Workbench Explorer, we then have the open to decompress the .lha file which means that we no longer need to open up the Unarc tool separately.

As you can also see from the above screenshot, any Jpeg images are viewable as a thumbnail and once opened these will default to Multiviewer. 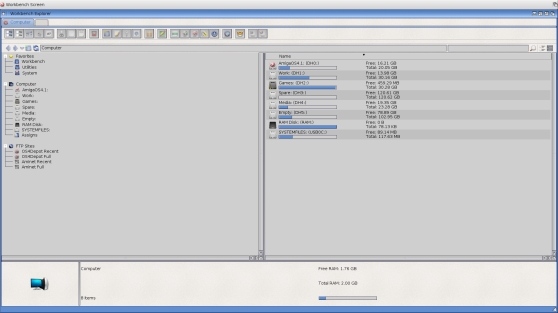 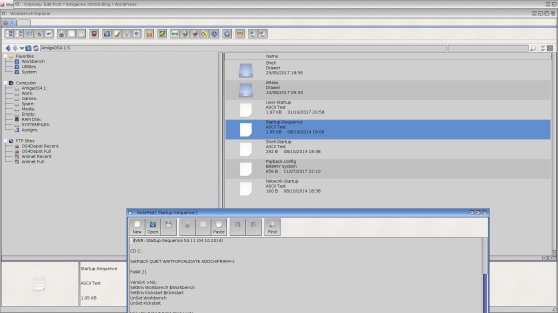 Along the top toolbar there are a number of useful tools that you can use, for example if I want to amend a configuration file, I am able to open this up in Notepad by clicking on the green notepad icon.  There are a lot of really cool features within this program such as Ringiho notification which means than when you download a file or copy files across from one location to another you are notified via the system notification tool so you can leave things running in the background and once completed you are then notified. 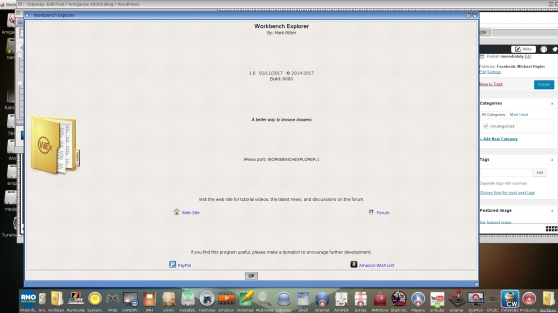 Overall I have been really impressed with this program.  It is described as “A better way to browse drawers”  and who am I to complain here at what has been done so far. It is quick to use, stable and is certainly  a lot more user-friendly than the traditional King of file browsers Directory Opus. In fact dare I say  we may have found a new program which has taken its long-held crown.  This program impresses so much that even those who use MorphOS on a regular basis are looking enviously over at this program and are wishing it was released on their systems too.

Mark Ritter has been very humble so far about this particular project, choosing to release updates of this program free of charge via OS4 Depot so that as many people as possible can try this out and hopefully find out like myself what a nice and useful little program this really is. However I think it may be time for others to recognise this and  reward him here for his efforts, as I did a few months back with a small donation as a token of appreciation. You can do by right clicking on your mouse and looking under the project tab for the about this program option where there are links to donate via PayPal or Amazon.  I for one am certainly looking forward to the next update and seeing what new features will be added.

Until next time have fun with your Amigas!